Your Kernel Flow system includes a Sync Accessory Box for collecting data from external devices during the recording of a Flow session. This might includes devices like heart rate monitors, a button/trigger, a force-plate, and so on. 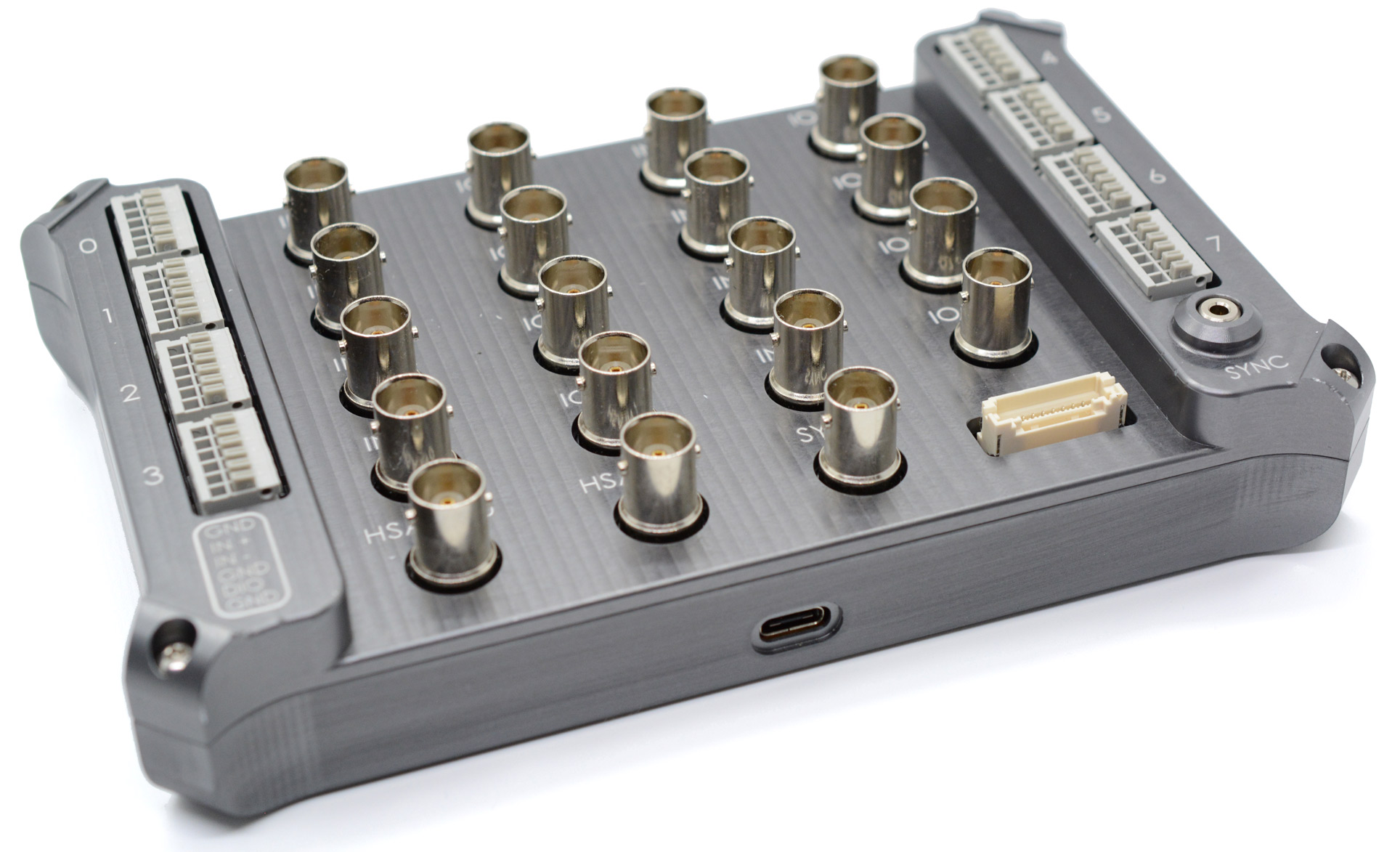 You might also use the Sync Accessory Box to record task data generated from certain external devices. You do not need to use the Sync Accessory Box to record or synchronize data from Kernel's supplied tasks, or tasks created using Kernel's Task SDK (as long as your task-generating system is on the same local network as the Kernel Flow PC). In those cases, Kernel's software automatically synchronizes and record those data along with your Flow data.

Sync data collected through the Sync Accessory Box is included in the dataset for each recorded session, and may be accessed in downloaded reports and dataset files. To learn more, see Downloading datasets.

To setup the Sync Accessory Box:

NOTE:
Do not use the red USB ports on the Kernel Flow PC.

The Sync Accessory Box has eight digital, and ten analog I/O ports that can all be used simultaneously. 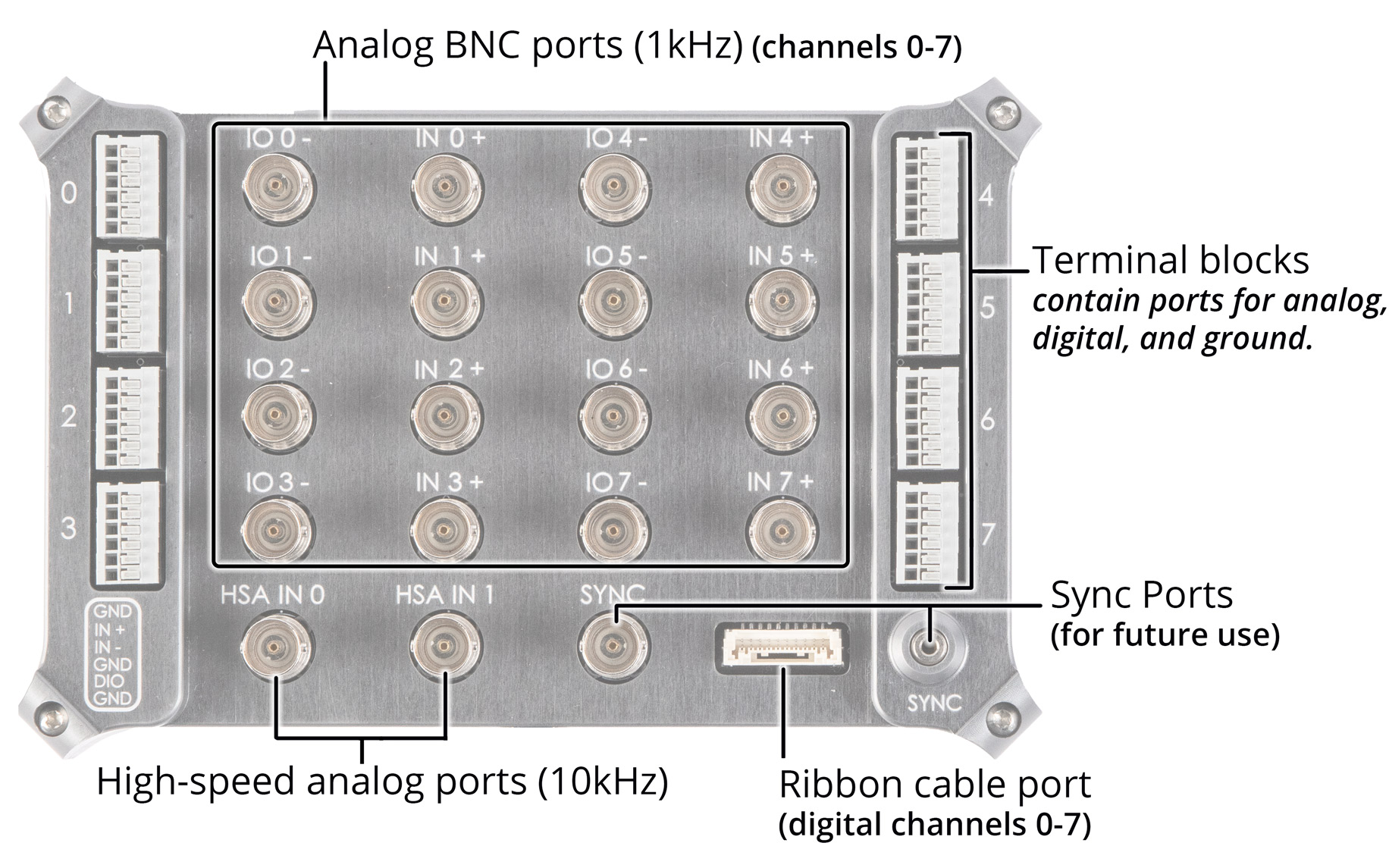 To connect an analog device:

Analog signals may be single ended (requiring one connector) or differential (requiring two connectors). When both connectors are used, the value used is the difference between the positive and negative values (the negative is subtracted from the positive).

When using a single-ended analog channel, do NOT attach wires to the – (negative) BNC/pin for that channel. Doing so may damage your equipment.

When using bare-wire connectors, depress the wire-grip tab with a screwdriver while inserting the wire, then release the tab. The terminal block grabs the wire and hold it in place.

Depress the tab again to release the wire.

To connect a digital device: When using bare-wire connectors, depress the wire-grip tab with a screwdriver while inserting the wire, then release the tab. The terminal block grabs the wire and hold it in place.

Depress the tab again to release the wire.

To view the signals coming through the Sync Accessory Box: 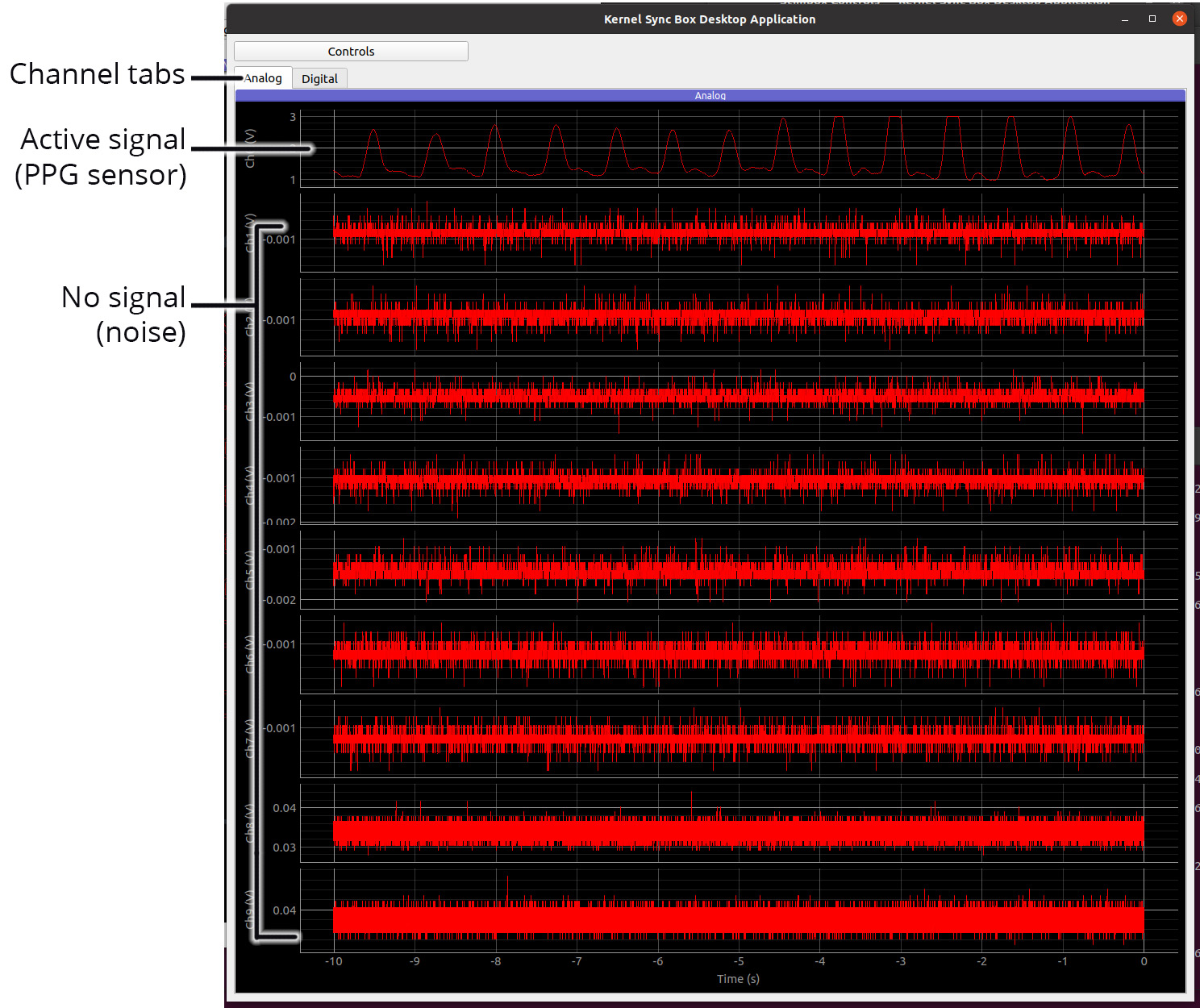 To generate a digital signal:

In some cases you may want the Sync Accessory Box to output digital signals. You can set any digital channel to output 3.3v which can be used to power a recording device like a PPG monitor, or to provide a signal to another device.

You will be able to control this (and other Sync Accessory Box commands) via Python in a future release.

I/O Contention warning: Never connect an output signal from your external device to a port currently configured to generate an output signal. Doing so may damage your equipment.

Disconnecting the USB cable from the Sync Accessory Box re-configures all channels to be set as Inputs to minimize this risk.

To use the digital channels to encode a signal:

In some cases, you may want to use all eight digital channels to be treated as a single byte of data to be encoded and recorded with your Flow data.

The resulting symbols are displayed in the Encoding Channel at the bottom of the Digital tab of the Sync Accessory Box window, and recorded as sync data in the Flow session.

By entering and using this site, you consent to the use of only necessary cookies to enhance your site experience and improve our services.